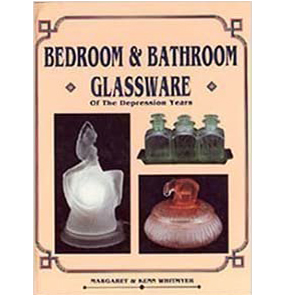 The first half of the Twentieth Century was comprised of two world wars, the stock market crashing and throwing the country into the Great Depression, women filling the jobs their husbands had to leave to go to war, the resurgence of the economy and the Greatest Generation, the Silent Generation and the Baby Boomers. The Art Deco Period was prevalent in the design of furniture, home décor and the ladies’ boudoir. Geometric and angular shapes were complimented with chrome, mirrors, and bold colors. The Golden Age of Hollywood exposed the middle class to the glamour of dressing tables and nightstands lined with perfume bottles, dusting powder jars and perfume lamps.

Many of these stunning glass objects have been captured and described in the Bedroom & Bathroom Glassware of the Depression Years, authored by Margaret and Kenn Whitmyer. Although the book was published in 1990, there have been very few books written that cover this wide range of glassware. I know many vanity and perfume bottle collectors who have this wonderful reference book in their library. There are over 250 pages of color photos of samplings of the top U.S. glass makers and atomizer companies, such as: Heisey, McKee, Cambridge, Fenton, Westmoreland, DeVilbiss, New Martinsville, Paden City, Imperial, Fostoria, Steuben and Tiffin, just to name a few. Topics include: Powder and Vanity Boxes, Perfume and Cologne Vanity Sets, Toiletry Articles and Night Sets and Bedroom Lamps and Clocks. Each section has nuggets of information about the objects and their makers, the issued colors and styles and their corresponding retail values at the time of publication.

I have used my book at least 2-3 a week to help identify a maker until it has literally begun to fall apart. I had to order a second copy for my library. I have ten books within arms reach for quick reference and this is one of them. I have always enjoyed the Whitmyers’ collector books because they do their homework and research and are meticulous about the facts. Anyone who is beginning to collect vanity glassware should put this book on their shopping list. Anyone who has been collecting for years probably already has at least one or two copies.