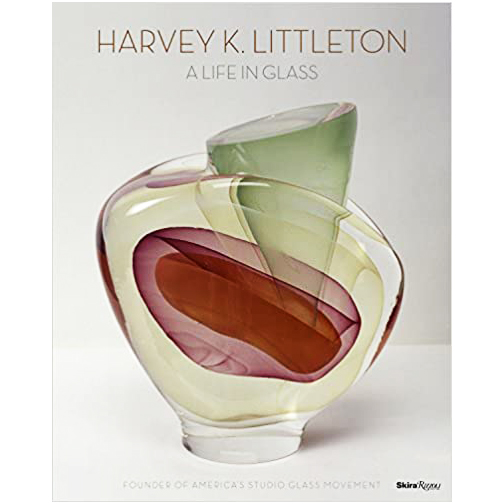 Harvey LIttleton, Honorary Lifetime Member of the IPBA, was honored in major museums throughout the United States in 2012 as the founder of the American studio glass movement, which marked its 50th anniversary in 2012. IPBA members remember Harvey as a premier collector of DeVilbiss perfume bottles and as a delightful keynote speaker at one of our early conventions. But the glass world recognizes Harvey Littleton as a supreme artist and, more importantly, a pioneer who (in the words of artist-author Joan Byrd), “… succeeded in taking glass out of a factory situation, in which an artisan produces a piece which was envisioned by a designer, and putting it in the hands of studio artists who control the whole creative process.”

Byrd has managed to produce a well-researched and documented biographical record that is a rarity – a very inspirational and enjoyable story to read. Whether one is a fan of studio glass art or not, you will take pleasure in reading about this remarkable man. Imagine the son of a prominent physicist growing up in the glass-dominated environment of Corning, N.Y. This same young man discovered a talent for (and love of) art, especially sculpture. Thereafter, his education became a compromise between his two loves.

From this beginning, the story of Harvey’s forays into the world of glass reads like a series of adventures as he explores, experiments, meets influential figures and begins to teach and work, initially in the area of ceramics. It was in 1962 that Harvey visited the Toledo Museum of Art and conducted two glassblowing workshops which were designed (in the words of a news release from the Museum) to explore the possibilities of molten glass as an expressive tool of the craftsman. The results created a revolution in the glass-making art and in the training of glass artists.It was also a revolution for Harvey, who eventually transitioned from ceramics into glass.

Interesting vignettes of a more personal nature are part of this biography, including events from Harvey’s childhood and teen years; his relationship with his lovely wife Bess (“Marrying Bess was the best thing that I did,” he has said of accomplishments in his long life); his encounters with glass geniuses (including his forcible removal from the blowing room floor of an Italian glass factory); his travels abroad and his love of boats. Perfume bottle and glass collectors will relate to reading how Harvey amassed an extensive collection of many types of glass for the same reasons we do – the love and appreciation of the aft form. In a lament familiar to all collectors, Harvey once reported after a visit in Paris, “Was much interested in a Galle bottle (with cyclamen flowers) but it was $1,000 or more and I reluctantly passed it by”.

The book’s author Joan Byrd, a student of Harvey’s, was a member of the first glassblowing class taught at a U. S. university in 1962. As an artist herself, she is well-equipped to understand, appreciate and document Harvey’s pioneering efforts. She conducted numerous interviews and had access to books, papers, and records of both Harvey and many museums and universities. The result is engaging reading, plus it is beautifully illustrated with photos of Harvey’s life and works.