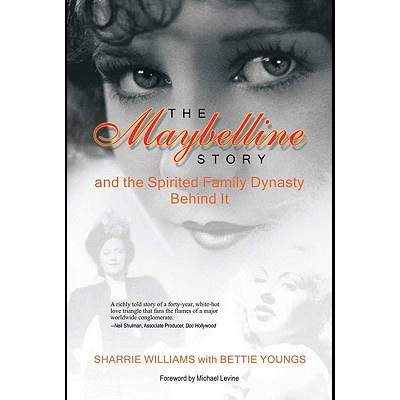 In 1915, when a kitchen stove fire singed his sister Mabel’s lashes and brows, Tom Lyle Williams watched in fascination as she performed what she called ‘a secret of the harem’-mixing petroleum jelly with coal dust and ash from a burnt cork and applying it to her lashes and brows. Mabel’s simple beauty trick ignited Tom Lyle’s imagination and he started what would become a billion-dollar business, one that remains a viable American icon after nearly a century. He named it Maybelline in her honor.

Throughout the twentieth century, the Maybelline company inflated, collapsed, endured, and thrived in tandem with the nation’s upheavals-as did the family that nurtured it. Tom Lyle Williams-to avoid unwanted scrutiny of his private life-cloistered himself behind the gates of his Rudolph Valentino Villa and ran his empire from the shadows. Now, after nearly a century of silence, this true story celebrates the life of an American entrepreneur, a man forced to remain behind a mask-using his sister-in-law Evelyn Boecher to be his front.

Sharrie Williams, heir to the Maybelline legacy, is Tom Lyle Williams great-niece and is steward of the vast Maybelline archives, Williams tells the story of the birth of the Maybelline empire and reveals intimate and never-before-told details about the fascinating family dynasty behind it.